Odester was profiled in the Detroit News article,

Our Piquette Square for Veterans is featured in this Detroit News article about the Quicken Loans philanthropic initiative to help end veteran and chronic homelessness in Detroit and across the country:

At the Built For Zero conference in Detroit on June 26, Jay Farner, CEO of Quicken Loans, spoke about the initiative and the power of using data to continually improve programs and outcomes. 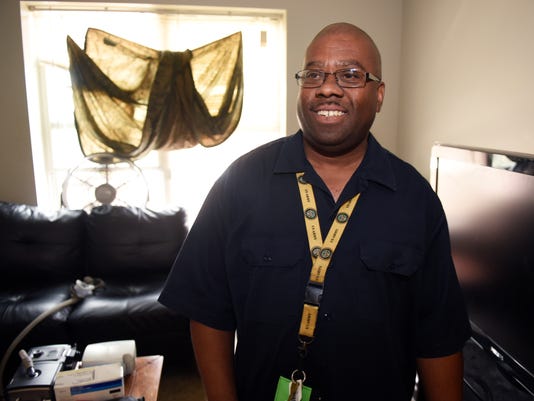 Detroit — Rodney Warner spent his younger years serving his country in the Persian Gulf. But he returned home to few prospects.

After losing a manufacturing job, the U.S. Army veteran wound up working and living in motels.

“When the economy got bad, I got laid off. My unemployment ran out. I needed somewhere to live,” said Warner, 50, who has since been linked up with permanent housing at Piquette Square, an apartment complex for formerly homeless veterans in the city’s New Center. “I got here and never left here. I consider that being a positive.”

More veterans like Warner may soon get a helping hand through a new commitment from Quicken Loans.

The Detroit-based mortgage lender is dedicating funding and workforce volunteers to support New York-based Community Solutions, a national nonprofit working to eradicate veteran and chronic homelessness in the city and 60 other communities across the country.

“Ultimately, ending homelessness — period — is something that can be accomplished, and I think that everyone here is focused on,” Quicken Loans CEO Jay Farner said. “We have a team of 17,000 people who are very excited to get going here.”

Farner discussed the new venture with The Detroit News ahead of Tuesday’s Community Solutions Built for Zero conference at Cobo Center. The event is hosted by Quicken Loans in partnership with the nonprofit to provide member cities with two days of learning and planning.

Farner declined to disclose specifics on Quicken’s financial contribution to the project. The company also intends to support its other home communities of Cleveland, Phoenix and Charlotte.

For Detroit, the partnership is believed to be one of the first of its kind for aiding in homeless reduction efforts, said Meghan Takashima, a housing development director for the city.

“They are the first for-profit entity that’s really been involved in this,” Takashima said. “We’re hoping their participation can help with driving more understanding within the business community.”

Over the past 18 months, Community Solutions has provided support staff in Detroit to aid its service agencies in developing data and improving procedures.

Since 2015, the nonprofit has assisted nine communities in the country to put an end to chronic homelessness or homelessness among veterans there. Close to 40 others have experienced monthly reductions in chronic or veteran homelessness, or both, said Rosanne Haggerty, the group’s president.

Participating communities have housed more than 92,000 homeless individuals overall. Of those, more than 50,000 are veterans, the nonprofit said.

The public-private partnership with Quicken is one that Haggerty said she hopes will be replicated elsewhere.

“We see Detroit as a real proof point to the nation on how to execute this collaboration,” she said. “It’s a highly accountable strategy that involves the whole community in getting to this result.”

Since Community Solutions has directed its resources in Detroit, the number of homeless veterans has dropped from a high point of 348 in January 2017 to 266 in May, according to city data.

That shift marks continued progress for a city that’s seen a 34 percent decline in homelessness among veterans since 2015, according to findings from Detroit’s annual Point in Time count, a street survey conducted in January to get a snapshot of those experiencing homelessness in the cities of Detroit, Hamtramck and Highland Park.

A uniform “by name” list of homeless veterans has been established in recent years, enabling officials to better track progress, noted Patricia Wolschon, director of homeless programming for the Detroit Department of Veteran Affairs.

Much of the improvement in Detroit is credited to a focus on permanent housing strategies over shelters. Detroit added 143 permanent supportive housing units in 2017 and expects to add another 300 over the next five years, officials said. 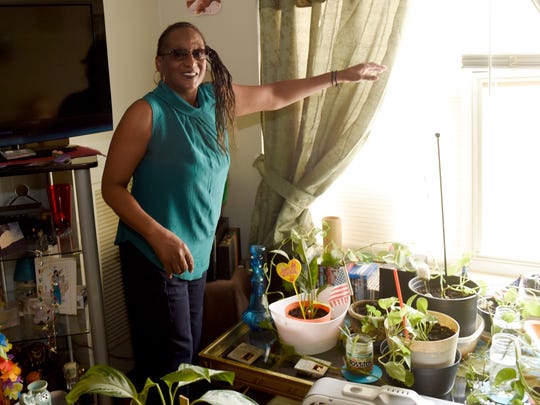 Odester Lawrence, 58, a veteran, tends to her plants in her apartment at the Piquette Square for Veterans housing complex in Detroit. (Photo: Clarence Tabb Jr., The Detroit News)

The city also has invested federal grant funding toward the development of supportive housing, targeted specifically for veterans experiencing homelessness. Among them, the Charlotte and St. Rita apartments.

Ragan said assistance efforts for the homeless are largely government funded but those dollars aren’t enough.

“Having someone like Quicken who, in addition to financial support, can help actually raise attention to the issue and help educate people about how we’re addressing homelessness in the city is really critical,” he said.

U.S. Army veteran Odester Lawrence also found refuge at Piquette Square about eight years ago after a lengthy struggle with substance abuse. It’s helped her get her life back on track, she said.